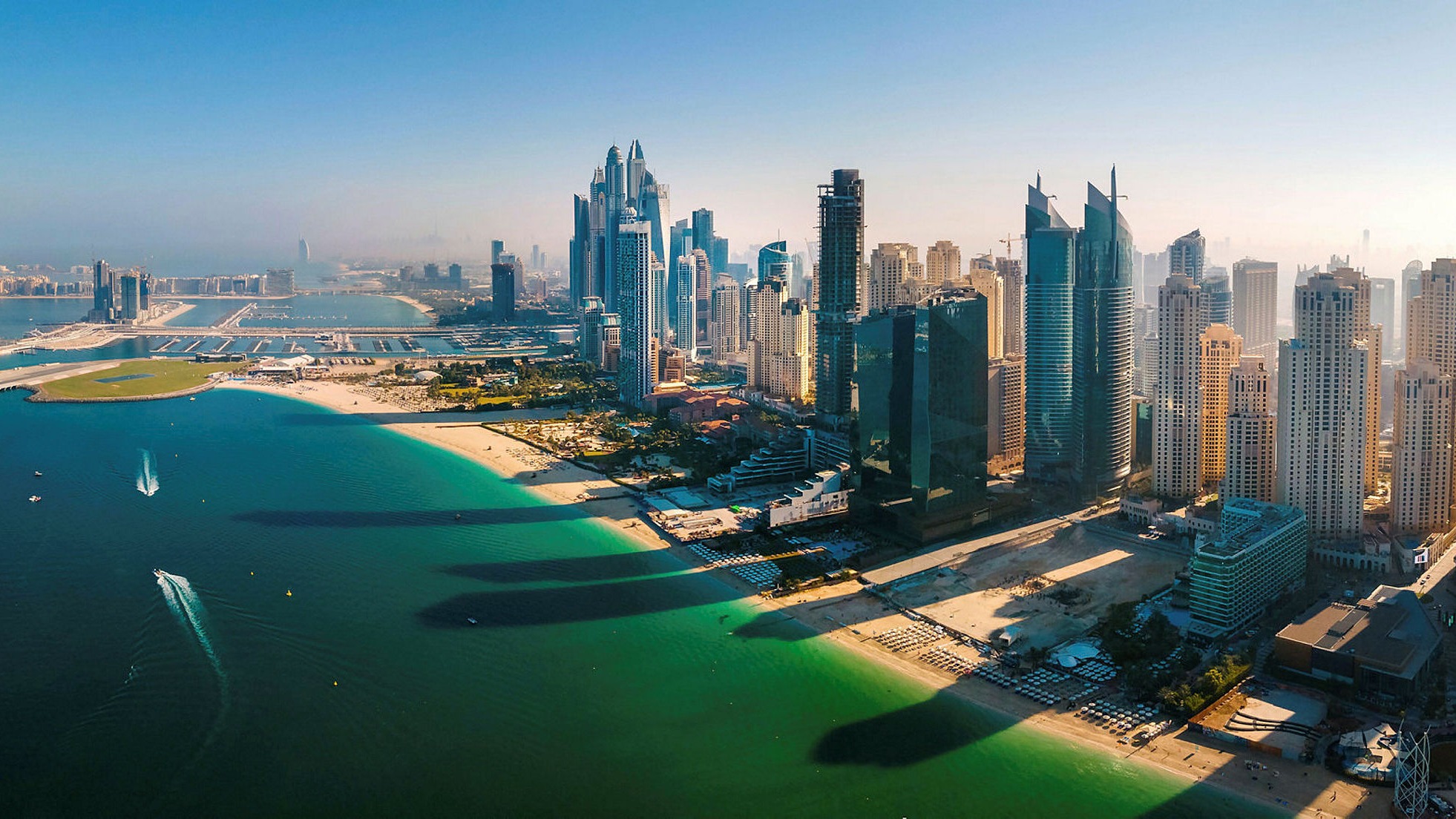 The team at Dubai property firm Mira Estate have reason to celebrate.

The luxury real estate company just clocked a 100% year-on-year increase in sales to buyers from Russia and other former Soviet states in the first half of 2022.

Property sales to these nationals for the firm, which specializes in Russian-speaking clients, doubled year on year to 2 billion dirhams, or $500 million, according to a company press release issued this week.

In a swanky Dubai nightclub in May, Russian real estate agents from another brokerage popped bottles of champagne to celebrate making record commissions on sales to fellow citizens buying their first homes in the desert oasis. One saleswoman raked in 4 million dirhams in commission in just three months, according to her colleague, who spoke to CNBC anonymously in light of professional restrictions.

And billionaire oligarch Roman Abramovich, former owner of Chelsea football club and longtime associate of Russian President Vladimir Putin, is reportedly house-hunting on Dubai’s Palm Jumeirah, the iconic man-made archipelago of artificial islands designed to look like a palm tree. The tycoon’s private jet, worth $350 million, has been grounded in the emirate for some four months after the U.S. Justice Department authorized its seizure.

The influx of buyers from Russia — as well as from the Commonwealth of Independent States (CIS), a group of nine former Soviet countries spanning Eastern Europe, the Caucasus and Central Asia — has pumped up the United Arab Emirates’ property sector in the wake of Russia’s invasion of Ukraine and subsequent Western sanctions.

While numerous countries imposed sanctions and asset seizures on wealthy Russians and figures linked to Putin, causing many to lose their multimillion dollar properties in cities like London and Paris, the UAE has remained open for business.

“The war in Ukraine and the impact of sanctions on Russian-speaking individuals and their establishments have led wealthy CIS investors to flee their countries and find a haven in Dubai,” Mira Estate CEO Tamara Getigezheva said in her company’s release.

“CIS billionaires and entrepreneurs have been flocking to the UAE in record numbers, leading to a surge in demand for real estate. Most homebuyers are looking for ready units and waterfront properties.”

Indeed, Dubai is seeing its hottest real estate market in years, with sales in the sector up 45% year on year in April and 51% in May, according to the Dubai Land Department.

Following a steep dive at the start of the pandemic, the UAE’s glitzy commercial hub saw a steady recovery after it adopted a more relaxed approach to the Covid-19 pandemic as other markets were still imposing heavy restrictions. The UAE opened up new visa opportunities for long-term residents and remote workers, signed a historic normalization deal with Israel, liberalized some of its social rules, and switched from its Islamic Friday-Saturday weekend to the Saturday-Sunday one.

But the decision to stay neutral as much of the wealthy world shut its doors to Russians following Putin’s brutal invasion of its neighbor in late February has paid off particularly well for the UAE, whose 90% expat population, tax haven status and reputation for financial secrecy make it highly attractive to many of the world’s high-net-worth individuals.

Destination for the ultra rich

Dubai brokerage Betterhomes, in a ranking released in April, found that Russians moved up two places to become the fifth-top buyers of Dubai properties in the first quarter. And London-based citizenship-by-investment firm Henley & Partners in June released a report projecting that the UAE will be the world’s top destination for the ultra-wealthy this year, forecasting that it will receive 4,000 new millionaires.

Russia, meanwhile, is set to lose 15,000 millionaires, according to the firm’s research.

“Roots in the UAE are now becoming a must-have asset in every high-net-worth investor’s portfolio,” Philippe Amarante, a managing partner at Henley & Partners, wrote in the report.

Misha Glenny, journalist and author of the book “McMafia,” wrote in a post for Henley & Partners: “The UAE has experienced soaring rates of high-net-worth migration, primarily into Abu Dhabi and Dubai.”

“Affluent Russians seeking to escape the impact of the devastating Western sanctions on their country have started to move to the UAE and to Israel,” Glenny added, the latter of which is fourth on the firm’s destinations list.

Villas on the water

There’s also a clear trend as to what kind of properties Russian buyers go for, those who work in the business say.

“Mostly luxury properties, especially anything around the sea,” Tahir Majithia, managing partner at Dubai-based Prime Capital real estate, told CNBC. He named sought-after areas like the Palm Jumeirah, as well as the upscale Emaar Beachfront and La Mer properties along the city’s coast.

“Anything near the water with a good view, that is always their first preference.″

Buyers seek a mix of properties to hold and rent as investments as well as for personal use, though most are for investment, Majithia said. “Block deals,” in which a buyer will purchase a whole floor or several, are very common. One floor of a luxury apartment building will cost between roughly $7 million and $10 million on average, he said, though this of course varies with location and size.

Russians were always among the top 10 nationalities investing in Dubai property, Majithia said. But there’s been a spike since February, he noted, adding that “something we also noticed was some of these buyers were also liquidating their assets in other countries and moving those funds over here.”

Anti-corruption activists and lawmakers accuse Dubai of being a hub for dirty money. Kremlin critic Bill Browder has called for the emirate to be put on a financial blacklist, and a group of members of the European Parliament in May accused the UAE of facilitating “money laundering at a grand scale,” calling on it to sanction Russian oligarchs who’ve moved there.

The Financial Action Task Force, an intergovernmental anti-money laundering watchdog, in March placed the UAE on its “gray list” over concerns that the Gulf country had “strategic deficiencies” in stemming illegal financial activities.

In response, the Emirati body tasked with countering illegal financial activities told CNBC that the UAE “has a stringent framework in place to counter illicit finance and implement targeted financial sanctions. Effective measures are targeting a range of financial crime risks and typologies, including in the real estate sector.”

A number of government ministries have “outlined specific regulatory requirements with which the sector must comply in order to counter money laundering and terrorist financing and ensure that applicable local and international sanctions regimes are implemented,” a statement from the UAE’s Executive Office for Anti-Money Laundering/Countering the Financing of Terrorism read.

The country aims to provide a stable business environment for investors from around the world, it said, “while mitigating the risks of illicit financial flows from entering the country and protecting the integrity of the financial system.”

The measures come as the country steps up its reforms in an effort to meet international standards.

In the meantime, the UAE’s economy is booming.

“I’m sure a lot of Russians are trying to fix their problems and their issues, but Dubai will benefit ultimately from any crisis,” Emirati property magnate Hussain Sajwani told CNBC in an interview in mid-March.

“I’ll be honest with you, these sanctions … they made a lot of people nervous,” Sajwani said at the time. “If anyone brings money through the banking system here legally and professionally, we’ll do business with them.”