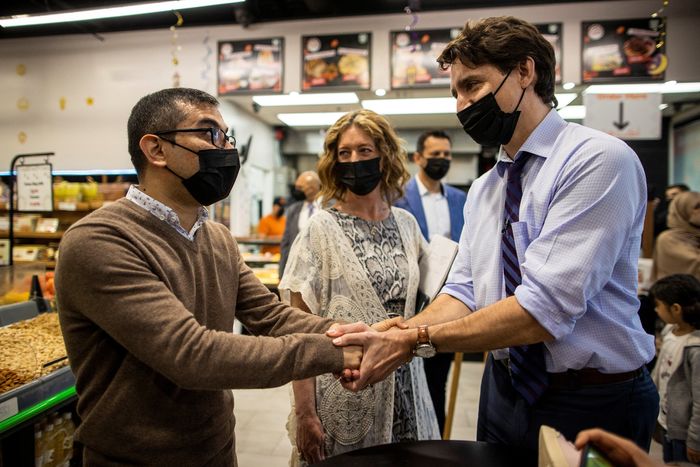 As country brings in more immigrants than its global peers, officials work to build houses and keep up with demand

Canada’s bid to attract a record number of immigrants, required to fill job openings and drive economic growth, has run into a bottleneck: There aren’t enough residences to accommodate these newcomers.

Immigration into Canada is on pace to hit a record high in 2022 of 431,000, following the entry of about 405,000 the previous year, and the country is targeting entry of another 900,000 newcomers in 2023 and 2024 combined. Because of immigration, Canada’s population over the past half-decade grew at almost twice the pace of its Group of Seven peers, Statistics Canada said.

The aggressive intake, though, has had repercussions for Canada’s housing market, which among G-7 countries has the lowest number of dwellings per capita, economists at Bank of Nova Scotia calculate.

Population growth, a shortage of housing stock and low interest rates helped push up house prices in Canada’s biggest centers, prompting would-be buyers to look farther afield and drive up prices in smaller, far-flung communities unaccustomed to housing booms. The cost of a single-family detached dwelling has doubled over the past decade, according to data from the Canadian Real Estate Association. Data collected by the Federal Reserve Bank of Dallas indicate Canada had, until recently, recorded some of the fastest growth in house prices among major developed economies.

And the pressure from immigration on housing keeps coming. In the second quarter, Canada recorded the fastest population growth over a three-month period since 1949, when Newfoundland and Labrador joined the country as its 10th province. Immigration accounted for 95% of that growth. Overall, Canada’s population sits at 38.9 million, up from 34.7 million a decade ago, with immigrants representing more than one-fifth of the populace.

“We can’t keep up with the amount of immigration coming to the country,” said Christopher Alexander, president of the Canadian unit of Re/Max Holdings Inc., the global real-estate listing company with 140,000 agents worldwide.

A rush is now under way among Canadian officials to build housing units and ease supply constraints. “There was a lack of forward thinking, lack of planning on the housing side, on what the actual [housing] need was going to be,” said Abe Oudshoorn, a professor at Western University’s nursing school in London, Ontario, and leader of a research group that since 2016 tracked the arrival of 51 immigrant families into Canada and their path to acquiring housing. He said the families his research group tracked remain stuck in housing that is either too costly or too small for their growing families.

Kanishka Noorzai and his wife, his four sons, his parents and his younger sister arrived here in February, from Afghanistan via Albania, and settled in the Waterloo region, an urban center of a half-million people west of Toronto. After a monthslong search that took him to apartments, townhouses and other domiciles, he found a three-bedroom bungalow—at a cost of nearly $3,000 a month for a one-year lease, or “really, really above our budget,” said Mr. Noorzai, 43 years old. He is currently working part time as a security guard but is seeking full-time hours.

“I really was surprised,” he said, “because I did not think it would be that difficult to find a house in Canada. It was a nightmare.” He has heard from friends who fled Afghanistan to the U.S., where they found reasonably priced housing. The bungalow he settled on isn’t ideal, Mr. Noorzai said, “but at least it’s better than a hotel,” where a local immigration agency had put his family up during their housing search.

Real-estate agents, home builders and economists say housing starts—which last year hit their highest level in over four decades—have to accelerate further to deal with immigration-fueled demand, against a backdrop of higher material costs and a labor shortage in the construction industry.

Mike Moffatt, senior policy director at the University of Ottawa’s Smart Prosperity Institute, a think tank, said one reason housing starts lagged is because regional and local officials underestimated population growth and overestimated the amount of housing stock. “Our zoning laws were set for a slow-population-growth country. When our population started growing, our regulatory environment didn’t adapt to that reality,” he added.

“Newcomers play a crucial role in the future of our communities and our economy, and we do everything we can to set them up for success,” the spokespeople said.

Canada intends to spend 10 billion Canadian dollars, or the equivalent of about $7.3 billion, to help double home construction over the next decade. Some of the money will be used to encourage municipalities to change zoning laws. Ottawa also wants to tie access to funding for municipalities for services such as public transit and wastewater management to a pledge to increase housing supply. The city of Toronto, a magnet for immigrants, recently allowed the building of self-contained, residential dwellings in backyards, or so-called garden suites, to help alleviate the housing crunch.

Hefty Bank of Canada rate increases this year have triggered a sharp decline in real-estate activity and a deceleration in annual house-price growth, though economists say immigration, and a trend toward smaller households as the population ages, will put a floor on the current price drop.

As for Canada’s rental market, it is tightening in major urban centers, reflecting immigration trends and house prices still at elevated levels. The average rent for all property types across Canada in August rose 11.1% from a year ago to nearly C$2,000, or the highest level in three years, according to data from Rentals.ca.

“Immigration has to be throwing gasoline on the on-fire rental market,” said Scott Ingram, a Toronto-based real-estate agent. Annual rent increases in Toronto and its suburbs and exurbs range from 10% to 26%, said Rentals.ca.

The Toronto Region Board of Trade calculates that one-third of Canada’s immigrants settle in Toronto, the country’s largest metropolitan area with 6.2 million residents. For every two immigrants who arrive in Toronto, at least one resident leaves because of high housing costs and limited supply, said Craig Ruttan, the board’s policy director.

“We’re sort of in a Catch-22. We need the immigration because of the labor shortages and the need for new workers,” Mr. Ruttan said. “At the same time, we’re hearing and seeing the shortage in housing.”

Benjamin Tal, an economist at CIBC Capital Markets who researches real-estate trends, said he is worried Canada lacks the labor capacity to build the required housing. Canada’s focus has been in attracting educated, high-skilled immigrants, he said. “We need to rethink immigration in the sense we also need a segment of newcomers to be lower skilled—because that’s what the shortage is.”

The most recent Statistics Canada data indicate the construction sector had roughly 82,000 vacancies, for a vacancy rate of 6.5%, or above the national 5.4% average. BuildForce Canada, labor-market data provider, anticipates nearly a quarter of home-building workers will retire by the end of 2031, requiring companies to recruit over 100,000 new workers to fill the gap.

“The competition for workers is going to be incredibly intense,” said Bill Ferreira, BuildForce’s executive director.