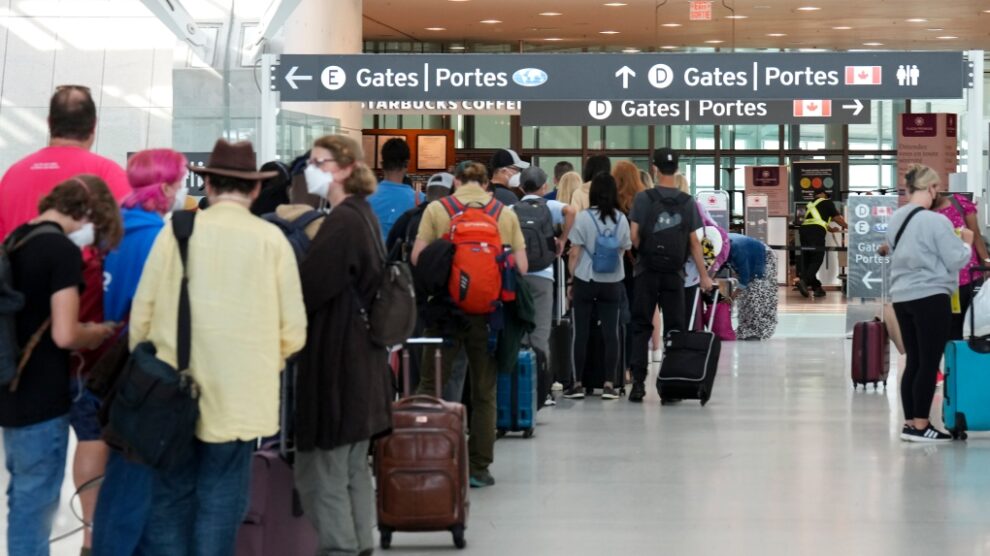 Canada and the United States are promising a new interview option for Nexus applicants in an effort to address a backlog of thousands of applications.

The Nexus program, which eases the flow of people across the Canada-U.S. border, stalled when offices on both sides were closed because of the COVID-19 pandemic.

A dispute over legal protections for U.S. border officers operating in Canada caused a delay in the reopening of Nexus offices on this side of the border  — resulting in a backlog of 300,000 applications.

A press release from the Canada Border Services Agency (CBSA) on Tuesday said that the backlog has been reduced to roughly 100,000 applications but that the new option will be made available this spring to further reduce wait times.

Previously, interviews were able to be held at the same offices in Canada.

Prime Minister Justin Trudeau and U.S. President Joe Biden discussed the Nexus program during a meeting at the North American Leaders’ Summit in Mexico City on Tuesday, according to a readout of the meeting provided by the Prime Minister’s Office.

A disproportionate amount — 80 per cent — of the 1.7 million people who use the program are Canadian.

Speaking to reporters Tuesday night, Public Safety Minister Marco Mendicino said the new process is a “win-win” for Canada and the U.S.

“We’re going to be able to take a bite out of that backlog in a significant way,” he said.

When asked about the potential inconvenience of having to book a flight to the U.S. to complete the interview process, Mendicino defended the new process by saying travel is at “the very heart and core of the NEXUS program.”

Washington had been calling for the extension of those legal protections to its officers working at Nexus centres — protections that those same officers already enjoy at pre-clearance sites at Canada’s airports.

That dispute appears to remain unresolved with the announcement of this new enrolment option.

A similar compromise was reached in December when Canada began reopening its offices near land border crossing for applicant interviews. A new two-step interview process was introduced where CBSA officers would conduct the interviews in these Canadian offices and their U.S. counterparts would complete a secondary interview on the U.S. side. In the past, Canadian and American border agents jointly conducted interviews in the same room.