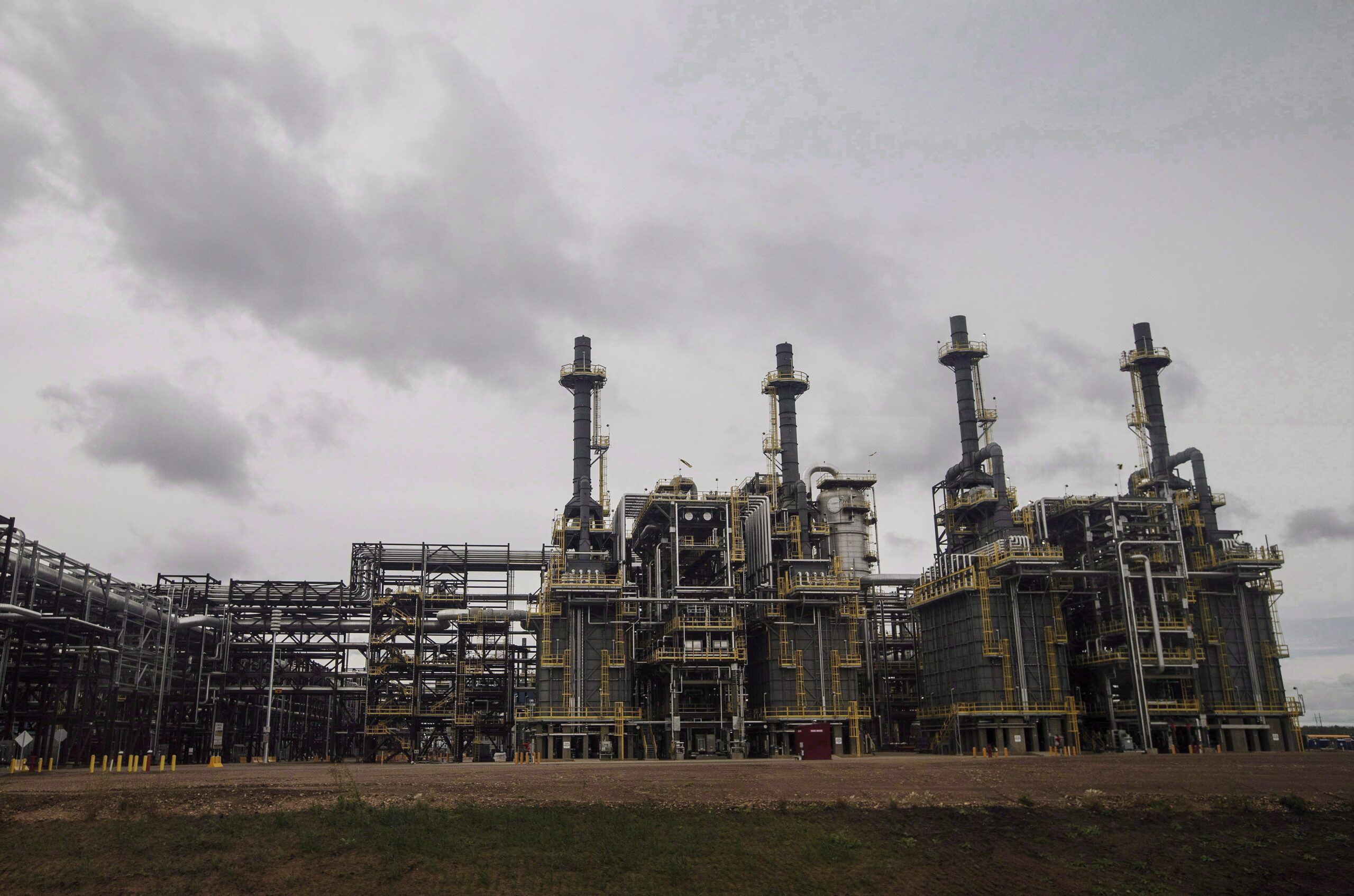 At 76 years old, Gwyn Morgan is not one to sit still.

The former oil executive, recipient of the Order of Canada and self-described “outdoors guy” remains a long-distance runner and led Global News on a jog through side streets and forest paths of Vancouver Island during an interview about his career — itself something of a marathon.

He says he got used to early mornings working alongside his father at a “hardscrabble” farm in Alberta. An engineer by trade, he made his career in the province’s oil and gas industry from the 1970s to the ’90s. He would found EnCana, known today as Ovintiv, and reigned at the helm of the gas giant when it overtook Royal Bank of Canada as the country’s most valuable company in 2005.

It was around that time Maclean’s magazine dubbed him “the most powerful man in Canada’s oil patch.”

“It was a golden time for the oil and gas industry,” he recalls in an interview from the dock of his home near Victoria, B.C., where he has easy access to the beauty of Canada’s west coast.

The retired oil patch veteran tells Global News he considers himself an “environmentalist” — he even has a compostable toilet at his estate.

Yet Morgan has been among the loudest voices chiding the Liberal government for not doing more to build new pipelines to get Canadian oil and gas to new markets.

He’s called Prime Minister Justin Trudeau’s policies towards Canada’s economically vital oil and gas industry a “fiasco” and has gone as far as to say that the decline of the sector has left him “ashamed” to be a Canadian in recent months.

When it comes to climate change, Morgan says he’s “not a denier” and supports decarbonization efforts.

“There’s being an environmentally-aware and concerned person and understanding, also, what the realities are,” he says. “It doesn’t mean we shouldn’t be trying, but we have to do it strategically.”

Morgan’s views might be at odds with climate activists and growing investor sentiment against fossil fuel production, but experts caution against undervaluing the importance of Canada’s oil and gas sector to not only the domestic economy, but to global energy security.

But Russia’s war in Ukraine has put the world’s energy crisis in sharp focus.

Europe is bracing for a lean winter as Russia — the European Union’s primary provider of gas used to heat homes — stymies energy deliveries.

While Russia cites maintenance of the Nord Stream 1 gas pipeline as the primary cause for delay, the west has accused President Vladimir Putin of crafting an energy war in an attempt to weaken support for Ukraine.

And if Russia is indeed using its vast resources as a weapon in the war on Ukraine, critics such as Morgan charge Canada with loading the gun for Putin.

Experts including commodities analyst Rory Johnston say Canada is not currently in a position to meaningfully offset reduced oil and gas shipments from Russia.

While allies such as Germany have floated Canadian energy as a reliable replacement for Russian liquefied natural gas (LNG), a project to get those resources overseas has not been approved and would not be ready in time to heat European homes this winter, Johnston says.

That limitation butts up against political assurances that Canada will support Europe through their crisis.

“We have a political responsibility to do whatever we can to help them with this energy crisis that they are going through,” said Deputy Prime Minister and Finance Minister Chrystia Freeland on Aug. 25.

“They know that Canada is there, and we are working on all the practical ways that we can support Europe.”

But had Canada continued with pipeline-building policies forged under former prime minister Stephen Harper, Morgan argues the country would be in a position to help.

“Our oil production would be at a level right now where Russia doesn’t have any power. … They wouldn’t be the swing producer. There’s no doubt about that,” he says.

The federal government purchased an expansion to the Trans Mountain pipeline in 2018 for $4.5 billion in an effort to get the project to completion after Kinder Morgan threatened to kill it amid environmentalist opposition. But it continues to face hurdles.

Johnston tells Global News that even if Keystone XL were approved today, it would take half a decade of investment and construction before a meaningful amount of Canadian resources made land in Europe.

“Unfortunately, part of the stability of our industry comes from the fact that we move extraordinarily slowly,” he says.

But Johnston notes that even after the war in Ukraine ends, European allies will likely never again be comfortable relying on Russian energy to the degree they did before — opening an opportunity for Canadian oil and gas to play a role in global energy security in years to come.

“I think it’s important not to think about, always, what we can do immediately, but how we can prepare for the next crisis. Because this will not be the last one,” he says.

Canada’s status as a resource-rich but increasingly difficult place to get pipelines built has not only affected the country’s reputation as a key energy supplier but as a trusted ally on the global stage, Morgan says.

“Canada became well-known as a place where you simply can’t get anything done. That is probably the worst kind of reputation you could have,” he says.

“Right now, we’ve got people dying and a war going on. And that is when I said, ‘I am ashamed to be a Canadian.’”

Oil and gas still the ‘backbone’ of Canadian economy

Despite setbacks in Canadian pipeline building, the oil-and-gas sector remains a “backbone” of Canada’s economy, says Tu Nguyen, economist and director of environmental, social and governance at RSM Canada.

At just under 10 per cent of Canada’s annual GDP, oil and gas is “one of the largest contributors” to the national economy, she says.

Much of this output revolves around the Albertan oil sands, the fourth-largest reserve of oil in the world and the largest such source outside of the powerful Organization of the Petroleum Exporting Countries (OPEC).

The oil-and-gas sector usually makes Alberta an outsized contributor to the Canadian economy — it feeds more into the federal budget than it receives, in other words. This had been the case since the mid-1960s until the COVID-19 pandemic saw Albertans receive more from the feds than usual due to emergency response benefits in 2021, per a report from the National Post.

Alberta seems to have bounced back to form in 2022, however, with a ranking of the 30 top-performing companies on the Toronto Stock Exchange released this week showing half were headquartered in the province and the oil and gas sector comprising the bulk of the list.

But investments in the oil sands — a particularly high-emissions source of fuel — have waned in recent years.

Nguyen says that oil extraction projects have lost favour in both the court of public opinion and the investment community in the past five or so years as investors realized that economic development would have to shift away from fossil fuels to foster a “liveable” future.

“That leads to hesitation in investing in the oil and gas industry,” she says.

Many Canadians who live outside Alberta may not realize the impact the oil sands have on their daily lives, says Johnston.

Prices soaring past $2-a-litre at gas pumps across Canada earlier this year could mark a wake-up call for many Canadians previously unconcerned about investment in the oil sands.

The Canadian dollar has historically performed well when gas prices rise, giving consumers a “safety blanket” that protects their purchasing power and mitigates pain at the pumps, Johnston says.

But a lack of investment in the oil sands has “weakened the relationship between oil prices and the Canadian dollar,” he says. Canada’s dollar value did not experience traditional highs even as a tight supply of gas worldwide sent prices soaring this past spring and early summer.

Governments, industry players and markets worldwide have recognized “the existential importance of decarbonizing our economies,” Johnston says, and have adopted emissions targets and policies to accelerate transitions to renewables and technology like electric vehicles.

But fossil fuel use could prove sticky because of the enormous role it plays in sectors such as transportation — long-haul trucking and air travel are two major sources of oil demand that will be “much harder to replace,” he says.

With increasing attention paid to global carbon emissions, pressure will be intense on oil sands producers in the next few years to clean up and reduce emissions tied to fossil fuel extraction, he says.

Canada’s status as a politically-reliable source of fuel makes it an attractive target for investment to meet future energy needs, Johnston says, even as he projects global oil demand could peak around 2030.

“While I do believe that governments and policymakers should continue to press down on reducing demand for these fuels, this entire kind of connected suite of crises are highlighting how important it is to have a reliable supply when you need it.”

Where to go with oil and gas?

Climate scientists could not be clearer that the status quo on greenhouse gas emissions is not good enough. Current policies have Canada on a trajectory for hundreds of billions of dollars in damages tied to wildfires on the west coast and lost revenue from reduced seafood harvests in the east, according to a February report from the Intergovernmental Panel on Climate Change.

Yet oil and gas remains the lifeblood of Canada’s economy. It’s a critical source of funding for government services like health care. It has insulated Canadian households against economic downturns before and it’s become a front in Russia’s war on Ukraine.

“When we look at how much oil and gas really contributes to our domestic economy, how are we going to decarbonize without hurting our economy? And that is, I think, that’s a difficult question,” says Nguyen.

Walking along Bay Street in Toronto, the epicentre of the country’s financial activity, Nguyen tells Global News she sees a possible path to reconcile these seemingly opposing forces pressing on Canada’s energy sector and a future economy that doesn’t rely on “volatile” oil and gas.

She notes that some traditional oil companies have already rebranded themselves as “energy companies,” sensing the need to shift their long-term focus.

Shell, for instance, announced this week that it would replace its CEO with the head of the oil giant’s renewables program after years of criticism that it was not investing enough in the clean energy transition.

If Canada is going to protect its economy while keeping its energy industry relevant, Nguyen suggests that these corporations are best equipped with the talent to understand the industry and the world’s energy needs.

“If we want to move forward and decarbonize, we need to consume less fossil fuel. In order to do that, we need to transition to more renewables,” she says. “And it so happens that oil and gas companies just have a lot of expertise, have a lot of capital and human capital in order to invest in renewables as well.”

At the start of 2022, Morgan says he might have agreed with industry observers who had said oil and gas was “sunsetting.”

But he says the war in Ukraine and resultant energy crisis has put the question into a harsher light that could see Canadian oil eventually wrest some power from Putin’s hands and enable the global transition to a cleaner energy future.