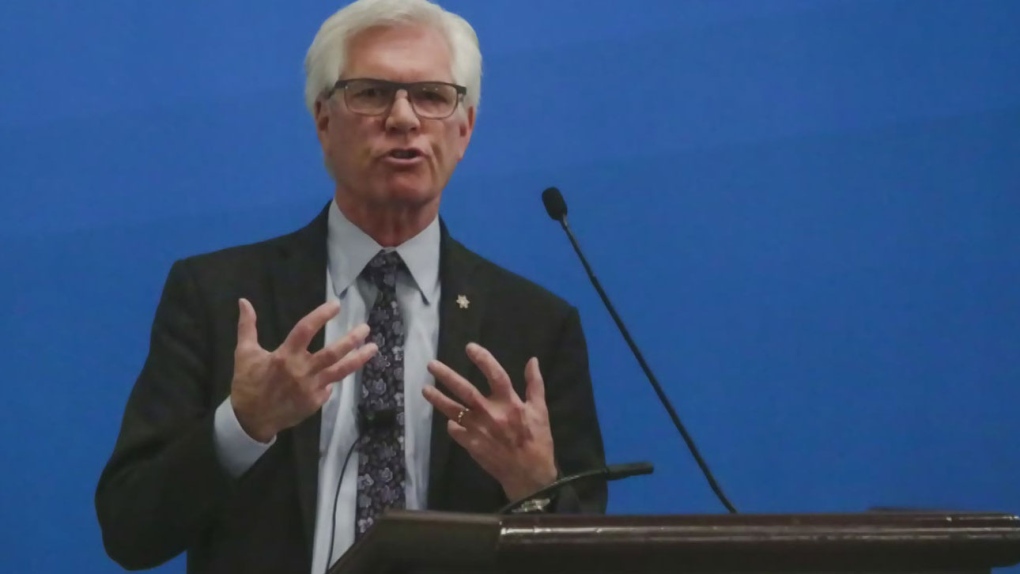 Shocked and saddened Manitobans are remembering a politician they describe as a passionate, respected advocate for the city, province and country he loved.

Winnipeg MP and former Liberal cabinet minister Jim Carr has died at the age of 71. The news was announced in the House of Commons on Monday.

“We are going to miss him so much. It’s a sad day for Canada,” said Dan Vandal, the minister of Crown-Indigenous relations and northern affairs Canada.

Carr, who had represented the constituents of Winnipeg South Centre since 2015, was diagnosed with multiple myeloma — a type of blood cancer — one day after he was re-elected in October 2019.

“It’s a huge shock and a huge loss, because this isn’t anything that anyone was anticipating,” Manitoba Liberal Leader Dougald Lamont said. “We knew he was ill, but certainly for it to happen this quickly is a real surprise.”

On Monday, a flood of tributes to Carr and condolences to his loved ones poured in.

Constituent Ken Burgess said he was shocked and saddened.

“He just was an extremely strong advocate for people in general, always sympathetic, always willing to listen, and a very determined man when he embarked on a cause.”

Carr was a professional oboe player with the Winnipeg Symphony Orchestra and worked at the Winnipeg Free Press before jumping into provincial politics. He served as deputy leader of the Manitoba Liberal Party from 1988 to 1992 before returning to the Free Press.

A 15-year term as the founding president and chief executive officer of the Business Council of Manitoba followed.

Current council president and chief executive officer Bram Strain remembers Carr as smiling and personable, and someone who got along well with everybody.

“He always took the time to get into deep policy discussions, and for a lot of people, that’s not exactly the most fun discussions,” Strain said.

“Jim really saw policy as the way to drive our province forward, our city forward, and ultimately Canada forward.”

He was an amazing intellectual and a fantastic writer, and had a passion for and belief in everything he did, Strain said.

“He was selfless. He put himself last. He put his duty to community first. He spent a lot of time on the road trying to do what was right for our province and our country.”

He tweeted about visiting Carr a few weeks ago, having tea and listening to Carr talk passionately about family, community and public policy matters.

Chris Lorenc, president and CEO of the Manitoba Heavy Construction Association, knew Carr prior to his days in the Manitoba Legislature, and the two of them worked on a task force on trade set up by former mayor Sam Katz in the late 2000s.

“The respect and the relationship that we developed was, I’d say, instant,” he said.

Lorenc said Carr was instrumental in shaping the direction of workforce recommendations for the mayor’s trade council report, which is cited as the genesis of CentrePort Canada.

“I always looked up to Jim as a person who was very capable of deep deep thoughts and a very visionary individual — one of the most articulate and well-spoken people I’ve ever met.”

Mercredi, the national chief of the Assembly of First Nations from 1991 to 1997, said he always respected Carr, who worked to find common ground with others — even if they sat on the opposite side of the political aisle.

Mercredi said he was also a champion for Indigenous people.

“He was into building relationships with First Nations people and in a way that would, I think, serve what he saw as a vision for the country, which was … inclusion,” Mercredi said. “So making sure that there was a sense of belonging for everybody.”

Sandra DeLaronde, a longtime advocate for missing and murdered Indigenous people, said “Jim did some incredible work and [was] a tenacious bridge builder,” in a text message to CBC.

Just days before his death, Carr was in Ottawa building another bridge.

His private member’s bill, the Green Prairie Economy Act, passed through the House of Commons last week. He worked with all three levels of government, the private sector and Indigenous communities to create the bill to build a green economy in the prairie provinces.

“Jim, with his experience leading the Business Council of Manitoba, brought business leaders to accept reform agendas like integrating Indigenous people into the economy and bringing business leaders to recognize we had to deal with climate change,” Carleton University political scientist Paul Thomas said.

Even those on the other side of the political spectrum respected Carr.

James Bezan, Conservative MP  for Selkirk-Interlake-Eastman, called Carr “somebody that, despite our partisan differences, I’ve always considered a friend.”

“He’s a great champion for Manitoba, and I know that his family is very heartbroken right now, and I offer my sympathy and condolences.”

Carr died peacefully at home Monday, surrounded by his family and loved ones, a family statement said. They thanked the doctors, nurses and medical staff who cared for him throughout his “courageous battle.”

Shimon Koffler Fogel, president and CEO of the Centre for Israel and Jewish Affairs, issued a statement on Monday saying the Jewish community joins everyone in mourning the loss of Carr.

“Throughout his career, he reflected an abiding passion for Canada, deep pride in his home province of Manitoba and unwavering commitment to his Jewish heritage,” it said.

“In touching the lives of so many, the common theme that marked Jim Carr’s many contributions was his dedication to making Canada a better place for all. May his memory be for a blessing.”