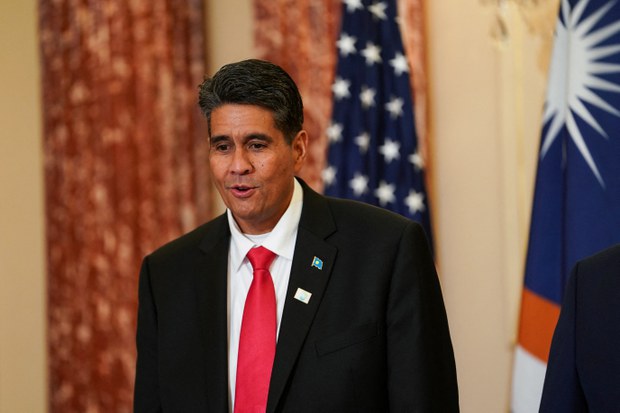 The United States and Palau, an island nation located in the militarily strategic western Pacific, are close to formally renewing their security and economic relationship after agreeing on a doubling in U.S. assistance.

The United States and Palau signed a memorandum of understanding Wednesday that paves the way for a final compact, according to a statement from the office of Palau President Surangel Whipps Jr. U.S. congressional approval of the final agreement is required.

“The relationship between Palau and the U.S. should be a partnership – Palau offers strategic importance in terms of stability in the region and provides defense rights to the U.S.,” Whipps said in the statement.

“The Compact and its economic assistance provisions should be a mechanism for Palau to increase its resiliency from threats like the pandemic, climate change and market disruptions,” he said.

Palau along with the Marshall Islands and Federated States of Micronesia are independent states that, under agreements known as compacts of free association, have ceded security to Washington in exchange for economic assistance and the right for their citizens to live and work in the United States.

The agreements are up for renewal and analysts have said the outcome of the negotiations will be an important signal of Washington’s commitment to the region as China presses its campaign for greater influence with Pacific Island states.

In Palau’s case, U.S. security arrangements have previously been agreed until 2044 and it is economic assistance that is being negotiated.

The memorandum of understanding reiterates U.S. rights and obligations under the compact including Palau denying the forces of other nations access to its territory and airspace, according to Palau’s statement.

Situated near the Philippines and Indonesia, Palau has dominion over an ocean territory as large as the state of Texas that is crucial to U.S. dominance in the Pacific at a time when China is rapidly increasing its military strength.

The U.S., under the compact, also has the right to station forces in Palau, but has not had a permanent military presence in the island nation for decades.

It plans to build an over-the-horizon radar station in Palau by 2026, according to Defense Department documents.

The statement said the amount of U.S. assistance agreed over the next two decades is more than twice a 2020 proposal that was rejected by Palau. Palau’s chief negotiator and vice-president at that time, Raynold Oilouch, had reported that the U.S. offer in 2020 was U.S.$400 million.

New economic assistance could begin from Oct. 1 if a full agreement is reached and approved by Congress, Palau’s statement said.

The last compact signed in 2009 by the Obama administration was not funded by Congress until 2018.