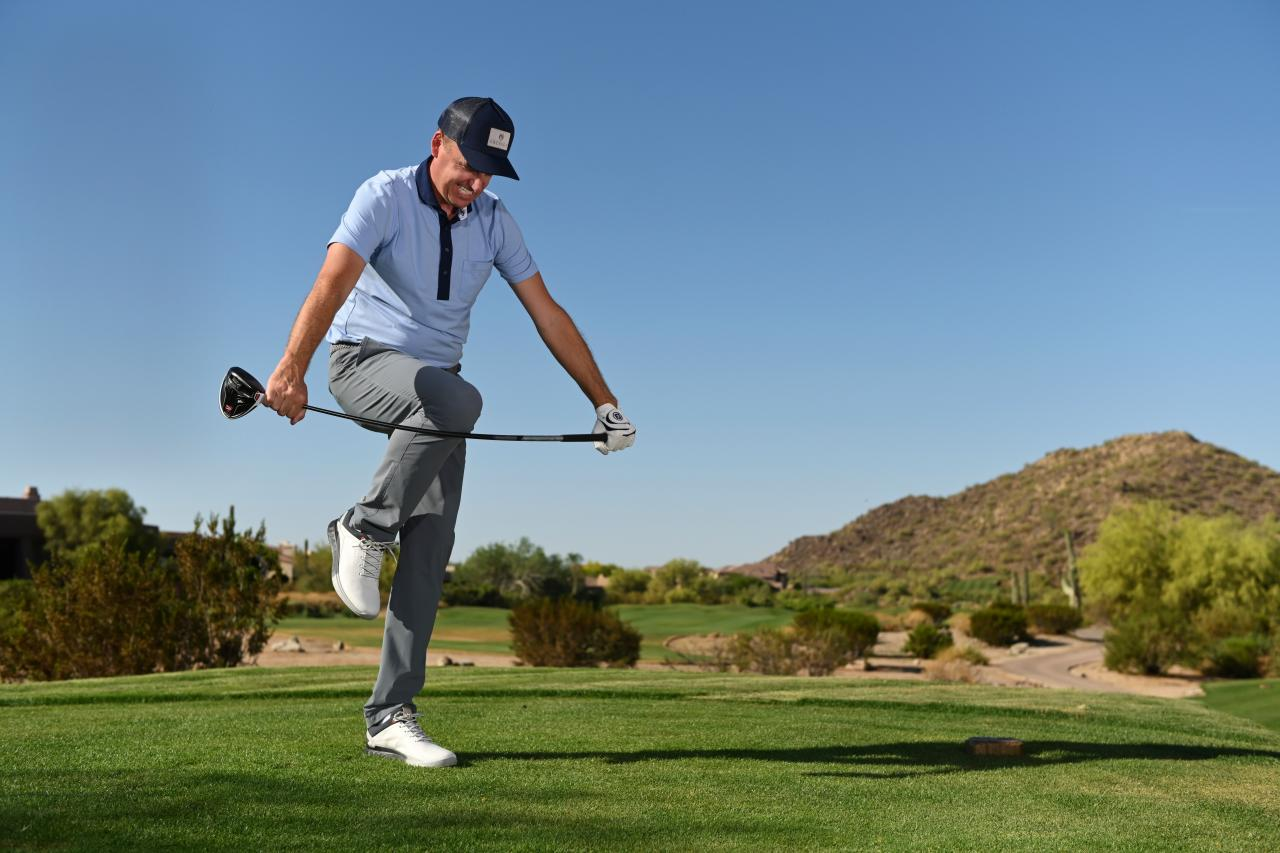 Let’s start where it all starts: the first tee. But before we get to that opening shot, consider how you got there. You raced to the course, checking texts and chugging coffee, then bolted to the range and hit a flurry of drivers (no good ones), zipped past the practice green and landed on the tee box, frazzled and all nerves. Then, in an act of utter cluelessness, you grab that same unfaithful driver and expect to stripe one. Instead, you flare it O.B., turn to your buddies and say, “What the hell was that?”

That was exactly what any sane observer would have predicted. You might claim hitting driver shows positive thinking — you heard a sport psychologist say that. Well, it doesn’t. Be realistic; before you hit a shot, ask yourself if you think you could pull it off eight times out of 10. Six times? Two? The purpose of that first swing is to hit your ball where you can find it and hit it again. You need to have a plan to make that shot as easy as possible. Trying harder, hoping harder, is no way to play golf.

If you’re like most golfers, you have a hard time shaking off bad shots, yet you don’t learn much from them. After that disastrous tee ball on No. 1, you march up to No. 2 with driver in hand. Crazy — basically, you’re committing to a strategy that just put an 8 on your card. Now, if the fairway is wide open, have at it. But if you see trouble where you tend to miss, forget driver, just put the ball in play.

Think of club selection (above) as “the gears of the game.” Driver is fourth gear and should be used only for shots with very little risk. Third gear might be a 3- or 5-wood — still plenty of firepower but safer. Second gear might be a hybrid, and first gear is a 5-iron. Point is, pick a club that will keep you in the game. Smoothing a hybrid out there 180 is a very acceptable start.

Golf is not quantum physics, or even regular physics. The challenge is not mental; it’s emotional. Feelings of pride and vanity can make you do dumbass things. Think about the emotions you feel when you’re playing well: joy, satisfaction, appreciation. Grab onto those, and get in a state where you can play happy. Forget the old image of the head-down, grinding golfer — does that sound like fun? Feel better, play better.

Here’s a great way to keep your expectations in check on the tee. Using your handicap, bump up the par on every hole where you get a stroke. So if you’re an 18-handicapper, all the par 5s become 6s, all the 4s become 5s, and so on. If you think that way, you’ll approach tee shots as just the first step in a process. Now you’ve got three shots to reach that 420-yard hole, and you can make a smarter choice off the tee and play to a spot away from trouble (above). Then all you have to do is make one or two “real” pars, and you’re playing better than your handicap. The key is to change the pars before you tee off because you’ll step up and think, OK, here’s where I want to go first, instead of, I gotta crush this driver.

Eventually, you make it to a spot where you have a play at the green. This is when your stress level really spikes because now you’re lying whatever and need a one-swing miracle. The problem is, you don’t have that, and you know you don’t. But you try anyway. Your vision of a baby fade that covers the front bunker and checks up by the hole takes shape as a boned line drive skipping through the sand, crashing into the lip and falling backward. It’s the one place you didn’t want to go — but again, highly predictable.

Just like your opening tee shot, your expectations were way out of whack. You were feeling pressure, and you picked the hero shot, the gold ring. So what do you do next? You drop another ball and take a freebie, which soars high and true and lands on the green. You just became what I call the “second-ball golfer,” a player whose do-over is always a perfect 10 (closely related to the golfer who drinks two beers at the turn and shoots 12 shots better on the back). Why? No tension, no expectations, just free swings — and better results. The trick is getting into that mind-set without going through all the crap. And that’s a choice you can make.

When you’re too far out to reach a green, don’t make the mindless mistake of grabbing a fairway wood and trying to jump all over it. That’s a tough shot, and even if you hit it on the button, you’re left with a partial wedge — another tough shot. Instead, hit a short iron and then another short iron to cover the same distance as the fairway wood and wedge. You’ll replace two white-knuckle shots with two comfortable ones.

Play for the long ball

Tell me if this sounds familiar: You shoot the flag with your fancy range finder, grab a club you’ve hit that distance, like, five times over the past few years, and off you go. Then, when your shot falls 10 yards short, you can hardly believe your eyes. You check the wind, you check the clubface, you look around for answers. But the truth is, you hit the shot you usually hit; you just played the wrong distance. So rather than shooting the flag, get the yardage to the back fringe and make that your number. You see, architects like to stick greens behind beautiful ponds and dramatic bunkering; they don’t hide them over the greens. Coming up short blows, so take that extra club and hit your perfectly average shot.

The location of the flag left or right on the green also has a big effect on your stress level: A risky pin means more challenge, and more challenge means more tension. In most cases, you shouldn’t think of the flag as your target — you’re not good enough. The idea of positive thinking makes you play to flags that are foolish for you, and if you fail, up goes your stress.

Try my two-step process here: (1) Locate the worst trouble around the green and make sure you pick a shot that doesn’t let you miss there; (2) move the flag in your mind to a spot that favors your typical shot shape. For example, if you fade the ball, move the flag to the left side of the green. Aim there, and your fade will put you in the middle. If the shot doesn’t fade, you’re still putting. You’ll stay out of big trouble and hit a ton more greens.

Sucking at the short game is the most demoralizing thing. For example, you see your approach shot heading toward a greenside bunker, but you’re not sure, so you ask, voice shaking, “Did that stay short?” Grim response: “Sand. It’s in the sand.” It’s like hearing a guilty verdict, and you spend the walk up to your ball wondering how many freaking strokes that’s going to eat up.

The ensuing shot is an awkward lash, with a downswing so jerky and out of control, you’re lucky to have escaped without injury. Your wrists flip, your arms collapse, the club dumps a foot behind the ball, and the shot goes nowhere. Tension did it again, plus your toxic tendency to try to scoop the ball out of the sand.

I promised I wouldn’t give you any swing advice in this article, but screw it. I need to tell you that a bunker swing is exactly the same swing you’d make on a 50-yard pitch from thick rough: a nice, full backswing and a firm-wristed thump at the bottom. Ever try to run fast through soft sand? You can’t do it because the sand has resistance. Same from the bunker. You can’t wuss out; you need a brisk splash that propels sand all the way to the green.

Success around the greens depends on the shots you give yourself. If you suck out of bunkers, take more club when there’s sand in front; play to the left when there’s sand to the right. On the greens, understand that the 50-50 putt, where you miss as many as you make, is five feet for the average golfer. So when you slide that double-breaking eight-footer by the hole, don’t get ticked off. That’s what’s supposed to happen. Be realistic, and you’ll reduce tension and play better golf.

Don’t get too cute

Oh, man, this one. Over a bunker, land it soft, stop it fast. Your problem is, you watch a lot of golf on TV, and it makes you think this little flopper is routine. You’re delusional. When you hit this shot in real life, you decelerate at the ball and, more often than not, dump it in the sand. So here’s what I want you to do: Instead of trying to delicately drop the ball on the front fringe, aim for the top of the flagstick.Then, when you decel, you’ll probably hit it pin high. And if you do send it a little long, nothing wrong with a 20-footer from behind the hole. Two putts from there, and you’ve got your bogey — or I should say your “par” on your adjusted scorecard.

The thing about these little greenside shots is they’re all about getting the distance right; you don’t really hit them wildly off line. And accurate distance comes from solid contact. The putter should be your first choice around the green because it’s easier to hit a putt solid than anything else. Next option should be putting with a hybrid, which gives you a little loft to bounce the ball through the fringe. If you have some rough between you and the green, you might need to chip the ball, and more rough might require a pitch or even a lob shot. But your intent should be to use as little loft — and as simple a swing — as possible. Bottom line: Don’t try to hit the shot you think a good golfer should hit. As your instructor, I’m giving you permission to use your putter or hybrid unless you absolutely can’t. That’s worth five strokes a round. Happy now?