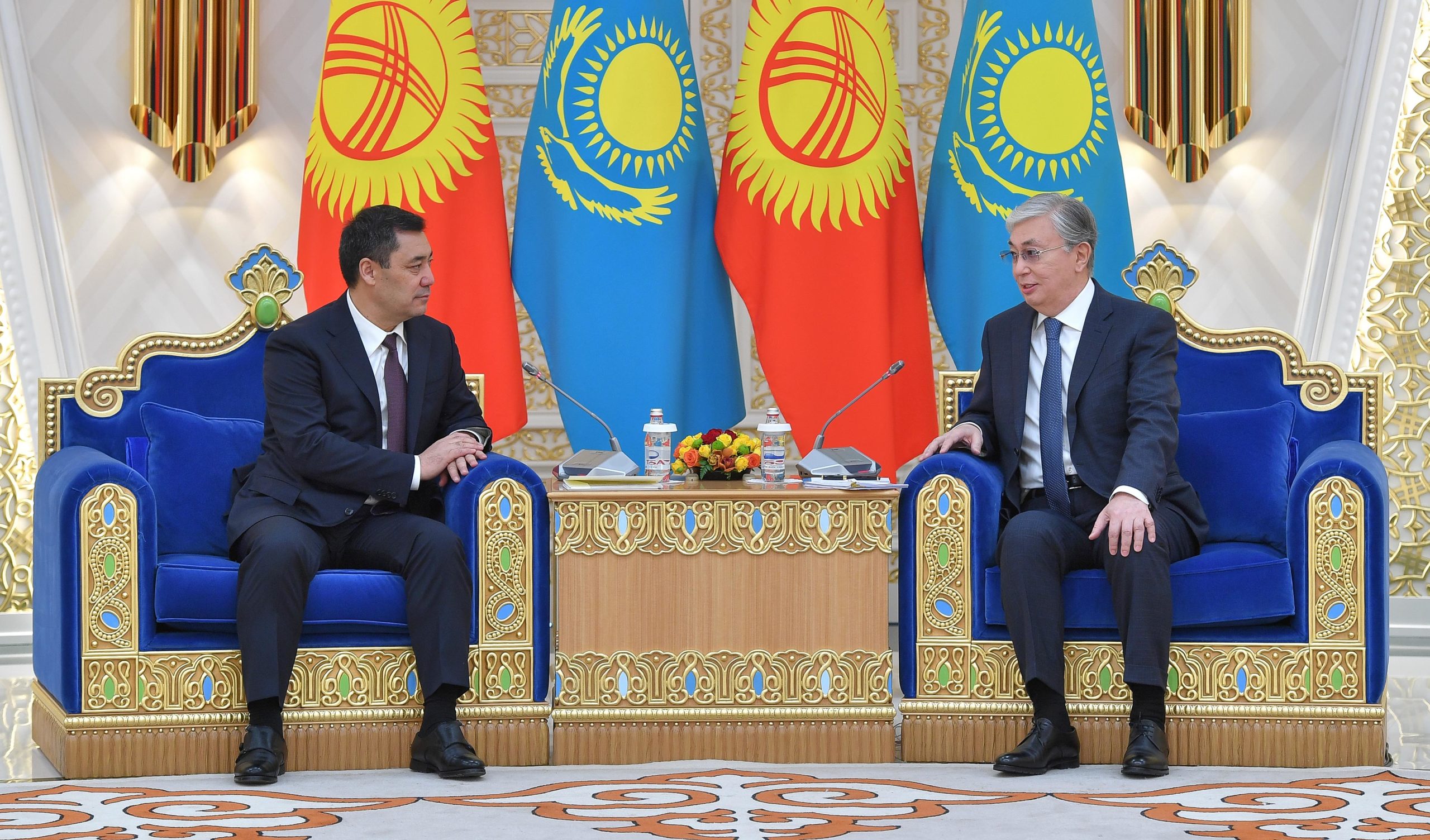 President Kassym-Jomart Tokayev paid an official visit to Kyrgyzstan on May 26. He met with Kyrgyz President Sadyr Japarov and focused on strengthening political dialogue, intensifying trade and investments, and discussing joint efforts in the water and energy sector, reports his press service.

The two countries will mark 30 years since the establishment of diplomatic relations on Oct. 15, 2022.

Tokayev visits Kyrgyzstan for the second time since he assumed the presidency in June of 2019. He went on an official visit to Bishkek back in November 2019.  This time, the heads of state agreed to bring their cooperation to a new level.

“There is no doubt that Kyrgyzstan is the closest state to Kazakhstan in all respects. This year marks the 30th anniversary of the establishment of diplomatic relations between Kazakhstan and Kyrgyzstan. During this period, we have expanded our horizons of interaction, and our friendship has become even stronger. (…) I want to note that Kazakhstan has established such strong ties only with Kyrgyzstan,” Tokayev said during a narrow format meeting with Japarov.

Tokayev and Japarov reaffirmed their commitment to increasing bilateral trade turnover up to US$2 billion. In 2021, the two neighbors traded US$970.8 million, 14 percent more than in 2020. Kazakhstan’s exports increased by 7.6 percent reaching $625 million and imports grew by 29.2 percent reaching $345.6 million.

Kazakhstan remains one of Kyrgyzstan’s largest investors investing $1.3 billion since 2005, while Kyrgyz investments into the Kazakh economy reached US$97.1 million.

The two leaders agreed that this is not enough. Japarov, who visited Kazakhstan in March last year, outlined more promising areas for cooperation.

“We must create favorable conditions for our entrepreneurs to intensify cooperation. As promising areas, we see the need to increase cooperation through the creation of joint ventures in light and food industry, mining, processing of agricultural products, projects for construction of small and medium hydropower plants,” he said, noting the importance of the establishment of the Green Finance Center under the auspices of the Astana International Financial Centre (AIFC) in Bishkek.

He suggested organizing the First Interregional Forum to facilitate cooperation between businesses in Cholpon-Ata in Kyrgyzstan in August.

The visit of Tokayev was marked by the signing of ten bilateral documents between the agriculture ministries, the Kyrgyz Ministry of Economy and Commerce, the Kazakh Ministry of Trade and Integration and the Joint Technologies company. Greater investment in the infrastructure of the industrial trade and logistics complex in Karasu (Kazakhstan) and Ak-Tilek (Kyrgyzstan) border crossings was also agreed upon.

“We have reached several agreements. Priority was given to strengthening trade and economic ties. When the whole world is going through a difficult period, it is especially important to unite our efforts,” said Tokayev, noting that Kazakhstan is ready to export more industrial products.

The rising number of inspections and traffic congestion at the border has been an acute issue hindering the flow of passengers, goods, and services. Both Tokayev and Japarov agreed on the need to implement digital technologies to address these issues.

Greater cooperation in the water and energy sector is needed to prevent water scarcity, a problem common for the entire region of Central Asia. Kazakhstan and Kyrgyzstan share the Shu and Talas river basins.

“We reiterated that transboundary water resources are of common value for us. The problem of water scarcity becomes more complicated every year. This is what international environmental organizations forecast. There will be no increase of water – it’s already clear,” said Tokayev, calling on the Central Asian countries to better coordinate their efforts.

At a joint press briefing the same day, Tokayev spoke in detail about the upcoming national referendum on the Constitutional amendments, describing it as a new stage in the country’s history.

“With the presidential system intact, the role and influence of Parliament will grow considerably. The opinions and voices of our citizens will be heard. After this Constitutional reform, as President, I will not be vested excessive powers and privileges. My task is to carry out the necessary transformations in society, and open the way to a bright future for our people,” said Tokayev.

Kazakhstan and Kyrgyzstan are planning several events to celebrate 30 years of diplomatic relations. While in Bishkek, Tokayev and Japarov are expected to attend the opening of the monument to the great Kazakh poet Abai Kunanbaev and the branch of Al-Farabi Kazakh National University in Bishkek.

Work is underway to unveil a monument to the famous Kyrgyz epic Manas in the Kazakh capital of Nur-Sultan.

“Abai’s philosophical and poetic heritage is a universal key to the mutual knowledge of different cultures. Remaining a vivid exponent of national feelings and self-consciousness, the great Kazakh humanist and educator advocated a broad intercultural dialogue among nations and opposed nationalism,” said Japarov.

He thanked Tokayev for increasing the number of educational scholarships for Kyrgyz young people to 50 to better facilitate study in Kazakhstan’s universities.

As part of this official visit, Tokayev and Japarov addressed the plenary session of the Eurasian Economic Forum that focused on Eurasian economic integration in the era of global changes and new opportunities for investment activity.

Tokayev devoted his speech to the prospects of increasing mutual trade in the union and improving the work of the Eurasian Economic Commission. The head of state said that the Eurasian Economic Union was established to create the appropriate conditions for the development of free trade between the member states.

“The Eurasian Economic Union has proven its effectiveness, including in the most difficult geopolitical conditions, as it is now. It should not come as a surprise that at times certain issues arise in the union, as in the European Union and other economic organizations that exist around the globe. Each state sees its national interests in its own way. Each state insists that issues be resolved in the way they see fit. This is the normal state of every international organization, especially those that deal with trade issues,” said Tokayev.

Eighty percent of the once existing trade barriers have been eliminated by the Eurasian Economic Commission. But integration is a long process requiring many compromises between member states, said Tokayev.

The two leaders are also expected to take part in the Supreme Economic Council meeting of the Eurasian Economic Union on Friday but in a virtual format.