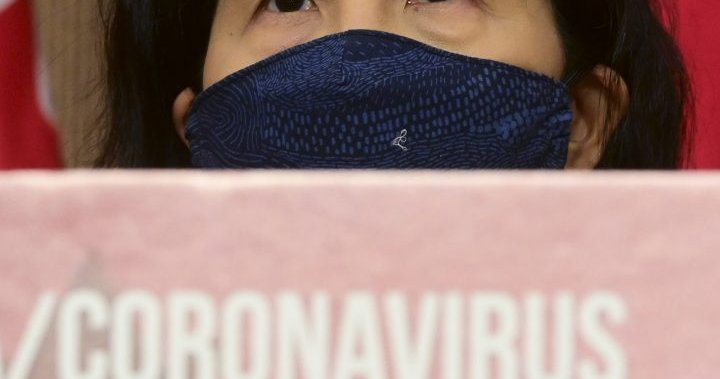 After a year that saw the highest number of COVID-19 deaths and a massive increase in infections, Canada’s top doctor says more investments are needed to combat misinformation about vaccines and pandemic measures to ensure Canada is ready for possible new variants of concern.

“This is the pandemic that is occurring in (a) full-on social media age, and all of us had to learn how to deal with that as the pandemic evolved. And it’s not easy,” Dr. Theresa Tam said in a year-end interview with Global News.

Misinformation is false or inaccurate information, which can be spread innocuously by those who may not be fully informed of the truth. Disinformation is considered more deliberate and can include malicious content such as hoaxes, phishing and propaganda, according to a definition provided by the United Nations.

Tam called 2022 the “Omicron age,” after the variant arrived in late 2021 and quickly became the dominant variant for the remainder of the year.

Omicron and its hundreds of subvariants have taught the world that SARS-CoV-2 could be much more contagious than previously thought and that the virus is cunningly adept at evading immunity, Tam said.

For example, more than 70 per cent of Canadians have likely been infected with COVID-19 since Omicron arrived, compared to less than five per cent of the population before Omicron, according to blood test studies funded by the federal government through the national COVID-19 Immunity Task Force.

But the virus has also proved it is capable of presenting new surprises and challenges, which is why Tam says it will continue to be a public health concern in 2023.

Communicating this ongoing uncertainty has been a challenge, Tam says, especially when Canadians are “fed up” with the pandemic.

But the rise of mis- and disinformation about COVID-19 vaccines and pushback against public health measures has made that task even more difficult, Tam admitted.

The lessons learned over the last three years of the pandemic have allowed Canada and the world to be better equipped to weather future waves or new variants of the virus, Tam said.

For example, the world now has bivalent vaccines that can prevent severe outcomes, antivirals like Paxlovid to treat symptoms and global surveillance systems to measure increases in cases and mutations of the virus — all of which were not available in 2020.

“We have these tools, and they can be rapidly deployed should we see a significant variant of concern,” Tam said.

“And of course, the personal protective measures and systemic changes like improving ventilation (are) always going to be good in terms of better preparedness for future infections.”

But one of the other lessons learned has been that collective action among populations is key to reducing risk — actions like seeing as many people vaccinated and boosted as possible, Tam said.

And when the advice keeps shifting over time as more information becomes known, it can be challenging, she said.

“I think there is a lot of misunderstanding … (among) people who actually enthusiastically took up the initial vaccine that (now wonder), ‘Why do I need to get boosted, especially if I just had an infection?’” Tam said.

“I just think that collectively we understand that this virus keeps throwing us curveballs.”

That’s why she says more money is needed to counter narratives that could erode the progress Canada and the world have made when it comes to COVID-19.

“I think we need to invest more in countering mis- and disinformation,” Tam said.

“Public health needs to be better at communicating in a way that resonates with people as much as those who may be against the vaccinations (resonate) with people always concerned about safety and effectiveness.

“That’s the information that people need to know.”

One of the best ways to counter false or misleading narratives is to engage with grassroots leaders and communities that people know and trust, Tam said.

She pointed to the success Canada has seen in decreasing the number of mpox (formerly called monkeypox) cases in the country over the last eight months since that virus first began to spread in Canada in May.

Hundreds of mpox cases were reported at a steadily increasing rate through the spring and summer, until a dedicated public health information campaign was launched tailored to populations who were at the highest risk of infection during the height of the outbreak: men who have sex with men.

This campaign included partnerships with key community stakeholders and vaccine clinics and pop-ups that were accessible and timely for the most at-risk populations.

The rate of new mpox cases has since slowed considerably. No new cases have been reported in Canada in the last three weeks, according to federal data.

This success was only possible through those community partnerships, Tam said.

Similar efforts are needed when it comes to countering misinformation about COVID-19 vaccines, she added.

“This is a very difficult area because people are just fed up with COVID-19, full stop, and yet the virus hasn’t left us and we’ve had to keep updating our vaccine recommendations as well as updating the vaccines themselves, so that’s understandable,” she said.

“But I think we need to provide information in an as accessible way as possible to people to explain why vaccines are needed. But also, I think, engage trusted voices, community leaders, people that different communities trust in order to increase uptake.”