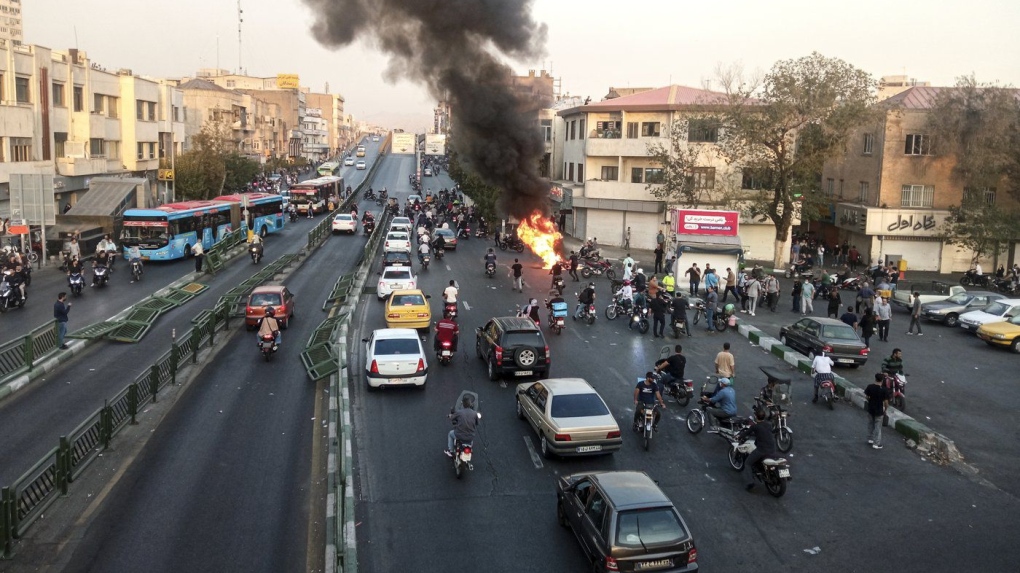 Canada has sanctioned a high-profile former Tehran police chief whose appearance at a Toronto-area gym last year sparked outrage and allegations that Canada is a haven for high-ranking members of Iran’s regime and their relatives.

Morteza Talaei is a retired second brigadier general with Iran’s Islamic Revolutionary Guard Corps and was in charge of Tehran’s police in 2003 when Iranian-Canadian photojournalist Zahra Kazemi was beaten to death in custody.

Kazemi was arrested in 2003 for taking photos of Tehran’s notorious Evin prison, where protests were taking place over students detained by the regime.

Iran’s government eventually admitted she had been beaten but maintains her death was accidental. The attending physician, who fled to Canada, said Kazemi showed signs of “very brutal rape,” torture and head trauma before her death.

Now, almost 20 years after Kazemi’s death, the federal government has announced it is targeting Talaei — along with three other Iranians and five entities — under the Special Economic Measures Act for gross and systemic human rights violations committed in Iran.

Under the regulations, the government can ban people from entering Canada and freeze any assets they may have in the country.

“We’re looking and continuing to look at all ways to ensure that the Iranian regime knows its continued reprehensible behaviour is absolutely unacceptable,” Prime Minister Justin Trudeau said Friday.

The federal government is under intense pressure from the Iranian-Canadian diaspora and the Conservatives to get tough on Iran.

The death of 22-year-old Mahsa Amini in police custody in September triggered massive protests across Iran and around the world, including in Canada. Iran’s morality police arrested Amini for wearing her mandatory hijab “improperly.”

On Nov. 14, the federal government listed Iran as a regime that engages in terrorism and systemic human rights violations and banned regime members, including their relatives, from entering Canada. Immigration Minister Sean Fraser said the ban could lead the government to revoke a relative’s permanent resident status if they’re already in Canada.

Some Iranian-Canadians claim that regime officials have immediate family living in Canada and may have financial assets here. Many in the Iranian community also allege that female family members of Iranian officials in Canada often don’t adhere to the strict dress codes the regime itself requires for women in Iran.

A video and photos posted on social media in January showed Talaei walking on a treadmill at a gym in Richmond Hill in 2021. Swiss-based Iranian independent journalist Abdollah Abdi posted the images, raising questions about what Talaei was doing in the country.

Abdi said Talaei later told him he was visiting his daughter but insisted it was a private matter.

An Iranian journalist inside Iran, Fariborz Kalantari, tweeted that the question isn’t why Talaei was in Canada but rather how his daughter obtained Canadian residency.

The National Post was the first Canadian media outlet to report on the photos.

Many on social media called out the hypocrisy of a high-ranking regime official working out at a gym where women do not wear hijabs.

U.S.-based Iranian journalist and activist Masih Alinejad has called on Canada to find out how the former “chief of Tehran police and IRGC commander was allowed to enter the country.”

“He’s working out next to an unveiled woman but his police flogged women for not wearing hijab,” she tweeted in January to her 600,000-plus followers.

Immigration, Refugees and Citizenship Canada did not answer CBC’s questions about how Talaei entered Canada previously and whether any family he might have here would be affected by the sanctions against him.

IRCC said broadly that spouses, partners or dependent children of those sanctioned for being a member of a terrorist organization would be inadmissible to Canada. But it added that “if a person is already in Canada and becomes inadmissible due to an inadmissible family member, they could apply for a temporary resident permit or for permanent residence under humanitarian and compassionate considerations.”

CBC News has searched property records and has not located any homes listed under Talaei’s name in Ontario.

The National Post reported on Talaei’s controversial history in Iran, including his role in creating a new police unit in Tehran in 2006 to enforce the country’s dress code for women.

Women in Iran accused of not wearing their veils properly face arrest and prison.

Talaei told the state-controlled Fars news agency in 2006 the unit would “confront women showing their bare legs in short pants.”

“We are also going to combat women wearing skimpy head scarves, short and form-fitting coats, and the ones walking pets in parks and streets,” he said.

The federal government also announced sanctions against Ali Ghanaatkar, who was a senior judge, prosecutor and interrogator at Evin prison.

U.K. Labour Party MP Chris Bryant has alleged Ghanaatkar was involved in mistreating detainees, bringing false charges against them and forcefully interrogating them.